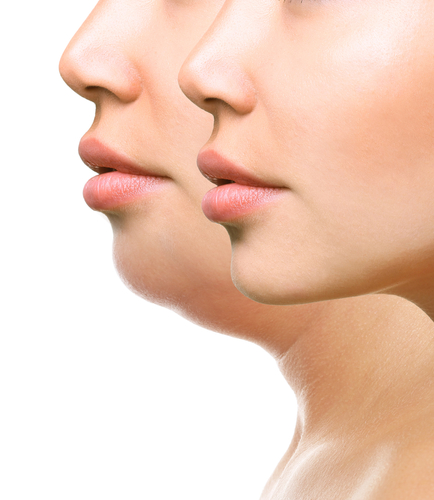 Now that summer is long over, we at Maine Laser Skin Care are seeing lots of folks who are looking at themselves more critically and wanting to look better.  Zoom and other methods of video meetings have also motivated people to look better, as they can now see themselves essentially the way others see them when on camera.

Many people are coming in to our offices with concerns about their submental areas, otherwise known as the "double chin."  Some note that when they see their image on Zoom with a chin down posture, they are upset at how much extra tissue they see.

Some of these same people will tell us about their recent weight loss.  They have lost inches elsewhere on their bodies, but frustratingly, no loss of fat in the double chin.

In all humans, the submental area under the chin does contain fat to varying degrees and amounts.  Unfortunately, this pocket of fat is fairly resistant to overall weight change.

The double chin area is definitely resistant to all weight loss techniques, and there is really is no way to use exercise to reduce fat to that isolated area. Fortunately, technology now allows us to target the submental fat and remove the cause of the double chin in two different ways. 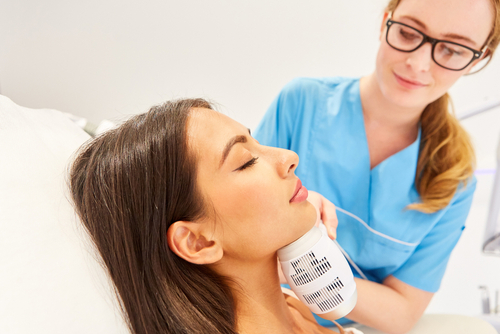 For those with sizable amounts of double chin fat, CoolSculpting treatments can address that pocket of double chin fat comfortably and in a fairly rapid fashion. Once the fat cells are disrupted by the freezing, your body will reabsorb and dispose of the damaged fat in a process called cryolipolysis.

Depending on the amount of fat present, CoolSculpting will reduce the gravitational effect of the submental fat.  Therefore, the appearance of double chin or lack thereof will significantly improve, especially from a side view.

For smaller amounts of fat that are not sufficient to be treated with CoolSculpting, Kybella can be used.  Kybella is an Allergan injectable product that uses deoxycholic acid to chemically dissolve the fat in that localized area.

Deoxycholic acid is naturally produced by your own liver to help digest dietary fat.  In this case, we are injecting the same chemical in the form of a medication into a pocket of fat to remove it permanently from that location.

Our basic takeaway is that you don't have to tolerate most forms of double chin, and you don't have to have surgery to resolve these problem areas.  To say goodbye to your double chin and to book a consultation to assess which modality of treatment would be best for you, please call either our Scarborough office at (207) 303-0125, or our Augusta office at (207) 873-2158, depending on which one is closer to you.